I have a great interest in history, which is why I try to understand how life was in the past. Closely connected to this interest, I have performed extensive genealogy research on my relatives, who mainly come from southern part of Sweden. In conjunction with a division of an inheritance in 2007, I was allotted two steamer trunks which had belonged to my grandfather and grandmother, Alfred and Rosalie, the principal characters in this book. Both trunks contained stacks of postcards as well as letters and photos linked to my relatives’ emigration trips to the United States in the early 20th century.

I soon started to dig into the findings in the trunks. After I had sorted places and dates from the postcards an “itinerary” became clear to me as well as a genuine wish. Namely, to travel “in the footsteps” of my grandparents. It started with a couple of tourist trips then turned into four detailed “research trips” planned and set up according to my relatives’ earlier journeys and activities. Local museums were visited for gathering information and several experts were contacted for my research. By the time the trips were over, my wife and I had visited all the places where my relatives had stayed, except northern Alaska.

The journeys and profound research gave me information, in the early 2016, to start writing a book with an almost true story. I wanted to include a lot of facts and at the same time write so exciting that it became a “page turner” for my readers. While writing, I have imagined life through my main characters and moved more than hundred years back in time. I hope with this story that I can share this amazing pleasure with my readers.

The book with the Swedish title Skräddare och Äventyrare was published in Sweden in the autumn of 2018. Given the great interest in the USA for the topic of European immigration in the late 1800s and beginning of 1900s I also started to think of a translation to English. A decision to translate was taken in 2019 and one year later The Swedish Tailor and Adventurer is being published.

Hopefully, my book will give American readers a deep understanding of why the immigrants left their native place and the struggle they went through in the new country.

The book's main characters, Alfred and Rosalie with family and friends

The main characters in the book are shown here. (Click on the image to enlarge it.) 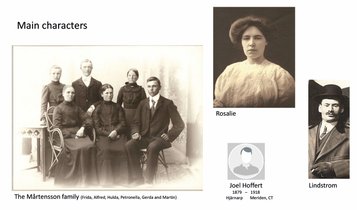 Based on several hundred postcards received by Alfred and Rosalie, the main characters’ location in the USA could be mapped out concerning time and place. There were also a sufficient number of letters to understand what really happened. Here are a few examples. (Click on the image to enlarge it.)

One of the most exciting places Alfred and his brother Martin visited was Nome in the far north of Alaska. They had to make a voyage of about 2200 miles north from Seattle on shabby boats to reach the isolated little town. But in Nome they encountered a golden hysteria they never had experienced. (Click on the image to enlarge it.)

In my search for information some historically interesting objects related to the main characters were found. Some of them are displayed here. (Click on the image to enlarge it.)

It is often interesting to make comparisons between what something looks like today and then try to understand how the site looked like once upon a time. Sometimes it is easy to see that you are standing at the same place and at other times you have to use your intelligence and imagination to understand. (Click on the image to enlarge it.)

Ships on which the adventurers traveled

In the beginning of the 20th century, direct lines from Scandinavia were opened to the United States to avoid taking a detour across England. Ships became faster and more comfortable. The main characters got to try out several of the notable ships. Here are some examples displayed. (Click on the image to enlarge it.)

A lot of basic research was done, of course, at home in Sweden, but there were also four custom-made trips across the USA to cover all the places Alfred and Rosalie visited including the 2200 miles train journey from Chicago to Seattle. Here is a small selection with pictures from our four trips. (Click on the image to enlarge it.)

The research and studies constituted a very exciting time searching for information and putting the puzzle together. Here are examples of some research objects I have dug into. (Click on the image to enlarge it.)

There are so many pictures I want to present. Fortunately, there are many more in the book that you will find when you start reading. But I cannot help offering you some more pictures that cannot be categorized under previous subheadings. (Click on the image to enlarge it.)